Whatever Happened to Aunt Bee? 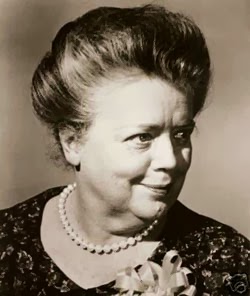 Frances Bavier, the Emmy-winning actress who gave life to Aunt Bee on The Andy Griffith Show was, by all accounts, the polar opposite of her alter ego. Hardly the domesticated matriarch, Ms Bavier was a sophisticate who resided in New York and Los Angeles her entire life, working alongside screen legends like Bette Davis and Henry Fonda. A Broadway and motion picture performer turned small screen superstar who, in 1970, abruptly decided to take the money and run a year before her Top Ten sitcom Mayberry RFD left the air.

After fifteen years of the grind of a weekly television series she’d had it with the business of show. She didn’t care much for people either, one of the reasons she moved—alone at age seventy—all the way across the continent to Siler City, North Carolina where her biggest fan operated a family furniture store. In this mythical shire mentioned so fondly in scripts produced for her by former writers from Amos & Andy and Leave it To Beaver she hoped to find the small town goodness she herself came to represent in the minds of middle America. Something she clearly had no concept of.


She was warmly bosomed into this community of 3,700 aw-shucks-just-plain-folks. Grand Marshall in the parades, an honored guest at civic functions, a flower of verisimilitude as she maneuvered the narrow streets of Siler City in the very same pea green 1966 two-door Studebaker Daytona she drove on Mayberry RFD now seen five days a week in syndication.

But what began as an immersion in Americana collapsed into a menagerie existence, like a black and white Twilight Zone episode. On Saturday mornings school buses pulled up in front of her split-level brick home on West Elk Street to let the Cub Scouts out with instructions to, “Go find your Aunt Bee.” Folks were peering through her windows at all hours of the day, everyone expecting her to be in character at all times, a role she didn’t care for at all. Even the few townsfolk she was close to insisted on calling her “Aunt Bee.” Irritating, but she had to have some friends.

In the South, particularly in that era, if people knew your family you were accepted in the community; newcomers were kept at arm’s length. Sure, it’s all kissy-kissy, ‘Can I get you some more sweet tea, Hon?’ but you will always be that person who moved to town in 1972… from California no less. They had a saying in these parts, “God turned the country on its side and all the nuts fell into California.”

A visit to the town center meant all eyes casting judgment on her every move, the ladies at the beauty parlor never forgave her for not joining their church. There were unceasing invitations to Sunday services wherever she went, “Don’t forget, you went to church in Mayberry,” delivered with a sickly-sweet, curt grin… insult to injury, that was one of Aunt Bee’s signature bits on the show.

Week after week the same goobers would bump into her asking, “Was that Opie I saw mowing your yard on Saturday?” She’d want to scream, “Why are you fixated on my yard?!?” Young couples would follow her down the aisles of Byrd's Lo Mark grocery store, “You’re not making pickles this summer are you, Ain’t Bee?”

No wonder she took to living out of her back bedroom with fourteen devoted kitties for company. She loved her feline companions so much she converted her two hundred fifty square foot downstairs bathroom into a sprawling cat box. What few visitors she had in her final years, store clerks and deliverymen mostly, were overwhelmed by the peeling paint, filthy living conditions, and an atmosphere steeped in soft cream clouds of ammonia that hung over everything like a suffocating umbrella.

In 1986, on one of those sticky summer days three years after she stopped venturing out in public Andy Griffith and Ron Howard, her co-workers for a decade, made a surprise visit to Siler City’s reclusive cat lady. She refused to allow them in, talking only momentarily through the closed front door. She declined to be a part of their Mayberry reunion movie, she never cared much for Mr. Griffith to begin with.

When she died in 1989 Frances Bavier bequeathed most of her seven hundred thousand dollar estate to the community; to this day an annuity pays out a Christmas bonus for every Siler City police officer. But her true legacy was gestating as she was laid to rest. After her home was donated to a hospital those feral cats scampered for the countryside, causing one hell of a population explosion that is only now beginning to subside a quarter century later. Veterinarians in the county became all too familiar with someone bringing in, “One of Aunt Bee’s cats.”