I Watched Netflix's Lost in Space So You Don't Have To... But You Should! 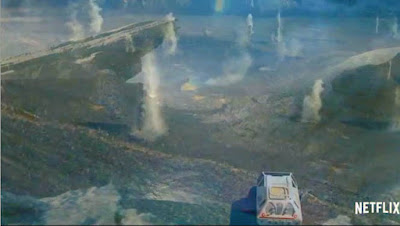 I was, and still am, a huge fan of the 1966 series Lost in Space, perhaps because I was 9 years old when it debuted. I'd never seen anything so exciting as those first 5 episodes; they hold up well today, with a healthy suspension of disbelief at times.

Truthfully, there aren't more than maybe half a dozen episodes from seasons 2 and 3 that are worthwhile but there's something about the way the cast clicked so well and Irwin Allen's disaster prone sensibility that worked for me then, and now when I'm feeling nostalgic.

So it was with some trepidation that I approached Netflix's LIS reboot and I'm happy to say this is one terrific ride. The first 2 episodes are especially exciting before the series settles into a more leisurely pace, sometimes too much so.

I won't give anything away but similarities to the first series include: the planet has an unstable orbit, the robot runs amuck, there are allusions to 'My Friend Mr. Nobody' and 'Attack of the Monster Plants,' the robot and Will have a special bond, weather is volatile, fuel is gone, a monster afoot, one of the Robinsons goes up in a balloon, they have a chariot, and there's a Debby but it's no Bloop. In the very last shot of the first episode, note the color explosion looks just like the special effect of the Jupiter 2 going back in time (and other examples) during season 3.

Because of particular plot points, two episodes are credited as being adapted from 'No Place to Hide,' the 1966 pilot that was recut to add Dr. Smith then spread out over 4 episodes. If you haven't seen it you should.

Even the turbo-charged third season theme by John Williams is incorporated into the new series. They'd be crazy not to.

But in almost every other way the show is the exact opposite of the original series and that's what makes this reboot so clever.

Judy is biracial, she and Penny are smart and brave, Maureen is the head of the Robinson expedition, she and John Robinson are estranged, Major West and Dr. Smith (who's now a woman) were not on the Jupiter 2 when it crashes (that's no spoiler, it wouldn't BE Lost in Space without the ship crash landing), West is out for a buck in the way Dr. Smith was, the robot doesn't speak much more than "Danger Will Robinson,"

Like Guardians of the Galaxy there's a '70s soundtrack - I sorta feel sorry for folks in the future, apparently there will never be any memorable tunes created henceforth. Which is pretty much coming true already, if you think about it.

It's a bit like Lost in that there are other colonists who crash land on the planet, back stories are told in flashbacks, and there are numerous "Oh shit!" moments in these 10 episodes.

What a brilliant move making Dr. Smith a woman, as portrayed by Parker Posey she's insanely devious, murderous, in that way only a woman could get away with. Perhaps why Jonathan Harris played the character so fey, basing his portrayal, he said, on actress Tallulah Bankhead. He had to be silly or the audience would never accept that the Robinsons didn't just shove him out of the air lock and be done with his weekly attempts to sell them out or get everyone killed in order to enrich himself.

Maureen Robinson is played by one of my fave actors from Deadwood, Molly Parker. On that HBO western series she played a drug addicted society woman, her emotional range is amazing. I didn't recognize any other cast members, you may, but they mesh beautifully.

At the end of the first episode we meet Dr. Smith for the first time, check out who Billy Mumy, the original Will Robinson, portrays in that scene. Oh the pain! I hope we'll get to see other original cast members going forward.