Peggy from Mannix: The Spectacular Rise & Fall of Gail Fisher 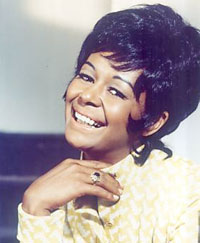 Mannix (1967-1975) was one of the most successful of the many private eye shows that were so popular in the late 1960s into the 1970s and, besides the cool swagger of star Mike Connors and the hottest theme song in TV history, it had one of my favorite characters of all time, Peggy Fair, Mannix' secretary.

Peggy was played by Gail Fisher, one of very few African-American women with a weekly role on a TV series before 1970. She was also the rare working mom with a young son at home (her husband was a policeman killed in the line of duty). As a professional, Peggy never took herself too seriously, yet she was the glue that held Mannix' detective agency together - and often found the clues that solved the cases where Joe Mannix couldn't.

Here is an episode from season 2, the year that established her on the show.

No other young African-American woman had ever been presented to the TV watching public in such a serious manner, with such poise, allowing for a wide range of emotions and letting the character dominate the storyline, not a series regular anyway. It had happened in individual episodes of shows like Route 66 for many years, where an African-American (usually an older person) was in a pivotal role, but they were one-offs. Peggy would be back next week, granted in a much smaller role generally. Episodes centered on Peggy were fairly rare but among the best of the series run.

Peggy Fair was not part of the first season cast, the show changed formats when they added Gail Fisher for season 2 and this was one reason Mannix was such a hit, hitting the top ten in 1971-72. Notice only she and Connors were named in the opening titles, Bill Cosby in I-Spy was the only other African-American who shared that honor in 1967. The next year Diahann Carroll starred as Julia, the first series with a black woman (or man) in the leading role playing a dignified character... ever!

She was sunny, upbeat, but when insults came her way Peggy gave as good as she got. A good-naturedness that sprang from a position of strength.

Many Mannix episodes are quite thrilling, even the ones that were boiler plate TV drama, they dazzled with superb cinematography and unusual camera angles shot in exciting locales adorned with fantastic architectural treasures. But it was Gail Fisher who gave the show it's heart, and its soul, otherwise the production would have been just another dry detective show, of which there were dozens. 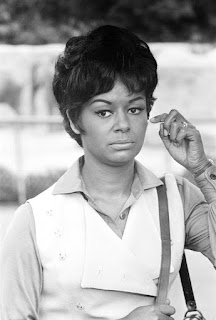 Gail Fisher was an incredibly effective actress who could jump from humor to dramatic tension easily. Odd how she virtually disappeared from TV after Mannix was cancelled in 1975. She'd won an Emmy for her role, the first black actress to do so, and was nominated for Emmies a total of four times while Mannix was on the air. Fisher was up for a Golden Globe four times as well; she was the first African-American woman to win a Golden Globe and she did it twice.

She couldn't get hired for another series or land many guest shots?

Like most (all?) pioneers she suffered. When has the first black (fill in the blank) not faced intense tragedy as a result?  Gail Fisher developed a troubled personal life including problems with drugs, no doubt fueled by the industry's lack of interest. She made headlines in 1978 after she was busted for possession of pot and coke and for using an illegal phone device. It was as if that became the excuse show business could use to dismiss her with.

There were other roles. She guest-starred in a 1980 episode of The White Shadow and co-starred in the motion picture  Mankillers in 1987 with Edd Byrnes (77 Sunset Strip). Gail Fisher died in 2000 of kidney failure. She was 65.