Have Yourself a Billy Mumy Christmas!

Billy Mumy was perhaps the best kid actor television ever saw, just the Twilight Zone episode alone where he's running around with a loaded gun should place him in the TV Hall of Fame. In 1964 and 1965 he starred in two memorable Christmas episodes with a sci-fi, fantasy flavor.

In 1964, Billy Mumy guest-starred in the Christmas episode for the first season of Bewitched, playing a troubled orphan that Darin and Samantha want to share the Holidays with. The cynical kid wants nothing to do with Christmas traditions until Samantha takes him (via broomstick) to the North Pole to visit the REAL Santa.

Ten year-old Billy Mumy was already a seasoned pro by 1964, able to wrench just the right amount of emotional punch from the contrived, sentimental ending tacked onto this 'Bewitched' episode.

At an age when many kids were playing space explorer in their backyards, Billy Mumy was playing space explorer on a multi-million dollar television production. During Lost In Space's excellent first season, producer Irwin Allen did something he'd never done before and would never do again on any of his other TV series - film a Christmas themed episode.

Debuting in 1965, Lost In Space was able to capture the imagination like no other sci-fi series before - superior special effects, coupled with an A-list cast and strong first episodes made LIS many a baby boomer's favorite show.

'Return From Outer Space' found the Robinson family in a predicament they would find all too common over the next 2 1/2 years - sinister stowaway Dr. Smith has depleted their resources for some momentary pleasure, endangering the entire party.

Will and the Robot find an alien machine that transports the boy back to Earth so he can get another bottle of food preservative. But he's hampered in his efforts by the townfolk, who think he's just making up wild stories and trying to steal chemicals from the General Store.

The weird thing is, it's supposed to be Earth 1999 that Will returns to, but it looks more like Earth 1949, with old fashioned buses, general stores and wall mounted, hand-crank telephones. 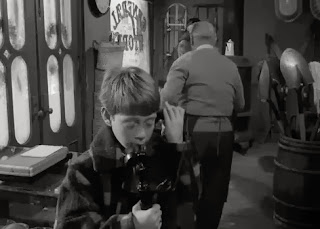 Also - if Will Robinson was part of the first family blasted into and subsequently lost and considered dead in space, don't you think SOMEONE might remember what he looked like just two years later and cut him some slack?!?!
Posted by TVparty! at 10:53 AM No comments:

One of the finest Holiday half-hours of the 1960s was when plucky Anne Marie Hollister got stuck on Christmas Eve in the private school where she was working. It was a touching episode of That Girl that took place as a flashback.

This episode was typical of the way sitcoms celebrated the season back in the day - schmaltzy, with a bittersweet edge that played up the emotional aspect of Christmas, with plotlines generally revolving around helping out someone in need.

One of the most fondly remembered Christmas comedies of all time would have to be The Mary Tyler Moore Show episode from 1970 where Mary was forced to work on Christmas Eve and her co-workers show up unexpectedly in the middle of the night to keep her company.

An interesting aside - this episode was written by the same guy (James L. Brooks) who wrote the That Girl episode referenced above called 'Christmas and the Hard Luck Kid'.

Here's a roundup of Christmas episodes from the 1950s - 1970s to jump start the season. From Jack Benny to Carol Burnett.

Want to see something beautiful and awe inspiring? 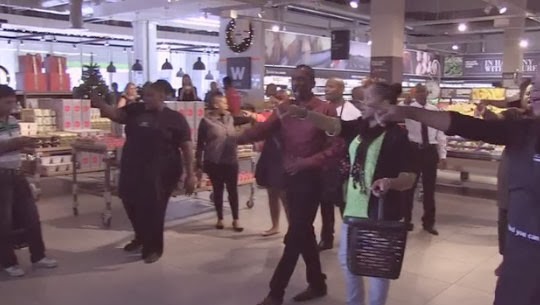 The Soweto Gospel Choir posed as shoppers and store workers at Woolworths in Johannesburg to sing Asimbonanga [We have not seen him] in tribute of Nelson Mandela. 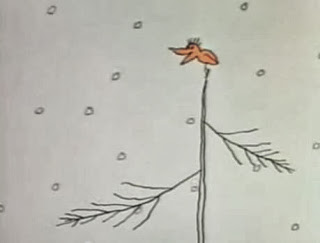 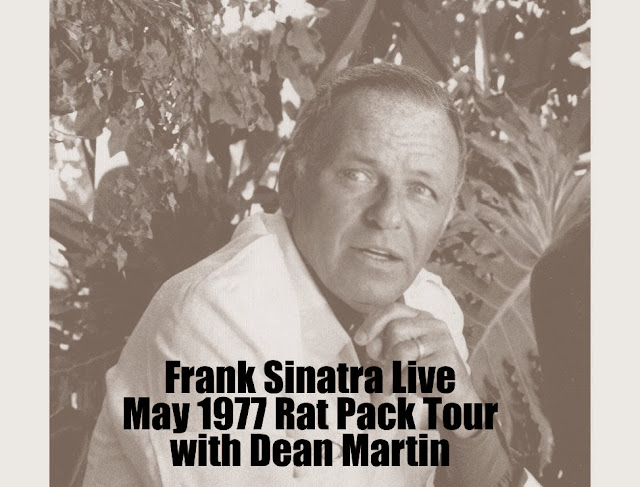 In the summer of 77 Dean Martin and Frank Sinatra did something they had never done before - they went on tour together. This is a little known fact, I've never read about this experience in any of the many books about the guys. If you want to read in detail about it check out the oral history, Beyond Our Wildest Dreams - the story of the Alberici Sisters when they went to work with Dean in The Golddiggers girl group. In the book they and other former Golddiggers share stories working with these two legendary performers on this moving feast.

Sinatra was on the road a great deal in 1977 but Dean mostly stayed put in Las Vegas, he had no desire to travel, he lived to play golf. It was an unlikely booking.

As a request from the owner of The Latin Casino in Cherry Hill, NJ, Frank asked Dean to accompany him for a month of shows starting with 2 weeks at the Westchester Premier Theater in Tarrytown, New York on May 17, 1977. Next they performed a week at The Latin Casino and ended their run at Chicago’s fabled Sabre Room. 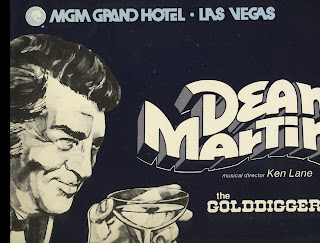 In my research I came across actual table-top recordings from many of the shows at the Latin Casino, and further down the road as well, captured on portable tape recorders fans brought with them. Both entertainers were at the top of their games in 1977. Though people at that time complained that Sinatra had lost his voice he sounds amazingly vigorous here, a creamy richness.

These selections were recorded from nights at the Latin Casino & Westchester Premier. Frank & Dean did 2 shows a night.

Here from the Westchester is Dean's opening comedy monologue:

Frank sings his favorite 'saloon song' Here's That Rainy Day - he never sounded better than he does here. This is an incredible performance from the Westchester Premier.

From The Latin Casino stage Dean clowns around, sings his signature tune - then Frank hilariously
butts in from a mic backstage.


Dialogue from the 1977 Rat Pack tour:
Frank: I want to ask you a question. What the hell were you doing drinking 7-Up? How dare you, you’re out of the club.
Dean: I wasn’t drinking 7-Up.
Frank: What were you cleaning with it? Your lighter?
Dean: No, I was pouring it for Rocky.
Frank: Oh, Rocky. I didn’t know he drank 7-Up either. You go out with him now?
Dean: Yeah, what the hell? I’m gettin’ tired of them girls.
(Dean was dating a girl named Rocky at the time.)

From The Latin Casino - Dean & Frank do their Rat Pack schtick for the show's conclusion. Boy is Dean drunk here.

While Dean stuck to the same songs every night Frank switched things up a bit as the tour progressed. Sinatra began the engagement opening with a disco version of 'All Or Nothing At All,' a tune he introduced on Sinatra and Friends, his TV special from April of that year. He must have realized the song was a stiff because by the time you arrived at the Latin Casino he dropped 'All Or Nothing At All' and replaced it with a more traditionally arranged 'I've Got You Under My Skin' which was a real crowd pleaser.

The Westchester Premier Theater was where Frank Sinatra was photographed backstage with the area’s most notorious mafia figures. That picture, taken in 1976, would haunt him for the rest of his life after the FBI got a hold of it.

For more on classic Las Vegas Entertainment go to TVparty! 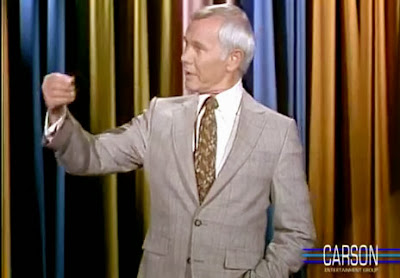 Here's Johnny Carson from December 20, 1979 with David Letterman, Bruce Dern, and Johnny & Ed's toy review for the holiday season. Wow does the monologue bomb! Hilarious... a full episode with the original commercials. 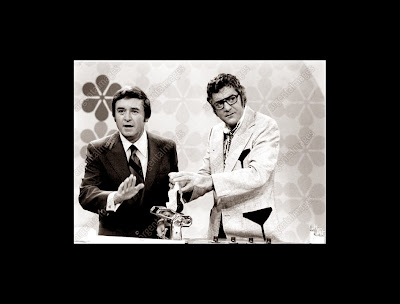 This is the first part of a phone conversation I had in 2011 with legendary comedian Pat Cooper, one of the few links we have to the greatest era of entertainment Las Vegas - and the world - will ever know. He shares his thoughts about Dean Martin, Frank Sinatra, Perry Como and how Las Vegas has changed since the 1960s & 1970s.

Famous for his hot-headedness it's no surprise that Pat Cooper is brutally honest in his assessment of his late performing partners. Coming soon I'm going to bring you some very rare recordings with Dean & Frank, stay tuned! 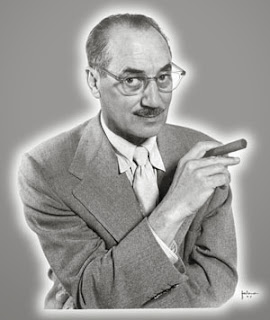 Groucho Marx' You Bet Your Life wasn't just a hit on TV it was popular on radio at the same time. Here's the December 21 1955 broadcast - not really Holiday themed but it's what folks were listening to at home almost 60 Christmases ago.

TVparty! Retro Christmas Explosion!
Posted by TVparty! at 5:55 AM No comments: