The Carpenters Sublime Christmas Specials of the 70s 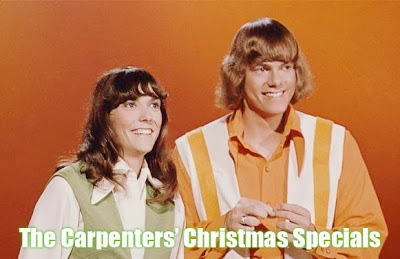 In the late-1970s Karen & Richard Carpenter starred in two spectacular Christmas specials, and here they are in their entirety. These two hours surely rank as two of the greatest holiday specials of all time.

The first was 1977's The Carpenters at Christmas - Karen's sublime voice was never better, the group's versions of the carols we all love are pitch perfect.

Christmas 1978 saw the debut of A Christmas Portrait, coinciding with the release of the classic holiday recording of the same name.

Read all about these shows a watch a tour of the Carpenter's home.

Thanks to Skeeter Ullman for catching this.   Larry Pennell best remembered as Dash Riprock on Beverly Hillbillies, passed away August 28th of this year. (Notice in the second scene in the BH episode below that Mr. Drysdale calls him Ripcord, he had just finished that series.)

Pennell was also seen on Twilight Zone, Gunsmoke and as Clark Gable on Quantum Leap.

Not only was he hilarious as Dash He also starred in one of my fave syndicated shows that I caught as a kid only when we went to the beach - Ripcord.

This show was very exciting to me as a kid, the aerial footage wasn't faked, it was actually shot in the sky with real skydivers. That may sound like no big deal today, but it was no easy feat with Fifties technology. I'm surprised the cameraman didn't plummet like a rock! In fact, in the filming of one episode, two planes collided in mid-air - of course the footage was used in an upcoming episode.

Typical plot: Ted and Jim find that a landslide wasn't an accident, but caused by a criminal fleeing from the law. Read more here.

The complete Ripcord Series has been released on DVD. 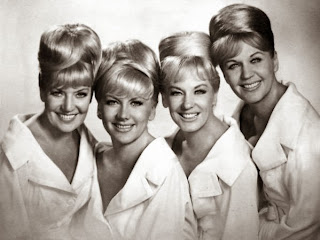 This is a segment from a late-1960s King Family Christmas Special where mom Alyce is reunited with her son who was stationed overseas during the Vietnam conflict.

This was one of the highlights on a show I did called The Christmas Special Christmas Special for Bravo a decade ago - I got to meet Tina, Cam & Yvonne at the taping. Nice folks! Tina was a regular on My Three Sons.

Sadly, Marilyn King, the last surviving original King Sister, passed away in August of this year. 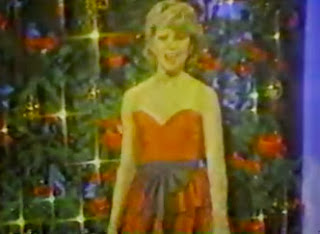 1980 Dance Fever Christmas Special starring Deney Terrio - a great big hunk of holiday cheese. Robert Blake was one of the judges but somehow everyone lived. Nellie Oleson (Alison Arngrim) from Little House on the Prairie was guest DJ. 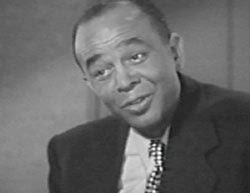 One of my favorite Christmas shows is by far the most controversial.

Amos 'n' Andy. If you say it's racist that's one of those rare statements in life that is 100% true and 100% false. You can read the entire messy history of Amos 'n' Andy and make up your own mind.

The Amos 'n' Andy television show (1951-1952) was one of only two TV series with blacks in major roles, there wouldn't be another until Bill Cosby in I-Spy in 1967. It was also genuinely funny with a superb cast.

The 1952 Amos 'n' Andy Christmas episode was one of TV's first holiday themed broadcasts - based on a script that had been performed yearly for more than a decade on network radio's most popular program, Amos 'n' Andy.

This moving holiday tradition began in 1940 with a 15-minute episode that centered around Amos sitting by his daughter's bedside and explaining the Lord's Prayer to her. It was a powerful and touching moment, perfectly capturing that simpler, religiously inspired Christmas spirit that prevailed decades ago. Nearly half the nation tuned in to those annual holiday broadcasts. 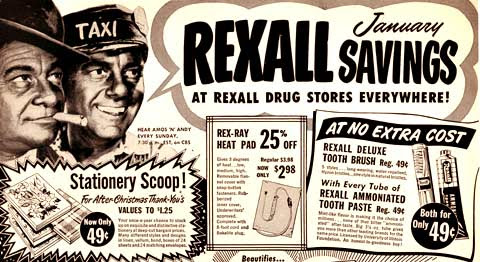 This is how Amos and Andy were presented to the public, two white guys corked up... I'd say that's offensive.

On the radio, caucasions Freeman Gosden and Charles Correll gave voice to Kingfish, Amos and Andrew H. Brown. Deserved or not, Amos 'n' Andy was roundly criticized for being racist in nature. While it can easily be argued that the radio version was offensive - the whole idea of white guys portraying conniving and lazy black guys was highly problematic right there. But it did provide much needed work to African-Americans who appeared in the supporting roles and as guests, in the 1940s there were very few blacks employed on network radio.

Here's the second of the yearly holiday broadcasts from the radio days: 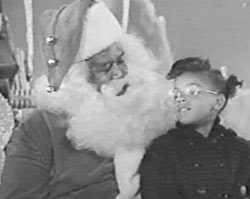 The TV program was a different matter; a superb, all-African-American cast helped to mitigate the program's inherent ridicule factor. The problem was there was no balance, no serious show on TV starring blacks to counter this broad sitcom. (As silly as Lucy was there were other more competent women in TV shows to balance her out. Not many but still...)

The best Amos 'n' Andy radio scripts from years past were adapted for TV, with few significant changes, beginning in 1951; these were original stories penned by the guys who went on to write and produce such seminal television shows as Leave it to Beaver, The Munsters, Andy Griffith Show and other classics.

The Christmas tradition was carried over from radio to television; the script remained virtually unchanged, right down to Andy playing Santa. (That's right - one of the first glimpses of Santa Claus that Americans got from their television sets and he was black.)

Freeman F. Gosden, Jr., the son of one of the creators, recalled in an interview those long-ago Christmas radio shows."It is probably safe to conclude that more people heard Amos' description of the Lord's Prayer than that of anyone else in the world. There is no question that he felt this was his proudest lifetime achievement. We would go to the studio and watch the show from the client's booth. Then Dad would bring the recording home and after dinner play it over and over again until midnight, with tears in his eyes."

READ ALL ABOUT AMOS & ANDY

After years of The Hollywood Palace Christmas episodes hosted by Bing Crosby it was Perry Como who had the honor on the December 20, 1969 broadcast.

The crooner opens with a medley that includes I'll Be Home For the Holidays and Love in a Home from Li'l Abner. Is the group behind him The New Christy Minstrels? I believe so...

In this beautiful segment Como croons my favorite carols, those about the birth of Jesus like The First Noel and Hark the Herald Angels Sing. 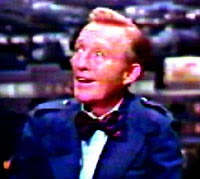 1961 was the year Bing started his annual TV Christmas hours but he had been hosting holiday celebrations on radio for decades.

Here's Bing's 1950 Christmas show on CBS, this was in the waning days of radio entertainment. Guests are his drunken wife Dixie Lee and their kids, a tradition he carried over to TV - but with a different family. At least these kids had talent.

This is a musical trip through the traditional Christmas carols performed with large choruses in the more heavy-handed orchestral style that was prevalent in the 1930s and 1940s.

Bing's 1954 Christmas celebration starts out with Rudolph the Red Nosed Reindeer. Note the lighter touch in the arrangements compared with just a few years earlier but it's still a very low key event, maudlin even.


Here's a bright, much more fun 1961 Bing Crosby CBS radio special broadcast on Christmas Eve 1961 wherein Der Bingle sings his holiday hits for the folks at home and the troops overseas. This wonderful almost-hour will surely fill you with the spirit of the holiday with exuberant, brassy arrangements of your favorite carols performed in the more 'modern' style that took hold in the 1960s and died out in the mid-1970s.

Jo Stafford is a guest, she's one of the greatest (and most unusual) singers of the era. Also along are Edgar Bergen and Charlie McCarthy. No Crosby Christmas special would be complete without Bing's wife, in this case Katherine. 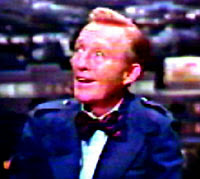 Bing Crosby was more closely associated with Christmas than any other Hollywood star. Having recorded the seminal versions of so many Holiday carols his yearly Christmas hours were a tradition in most American homes with a TV set - right up until his posthumously broadcast 1977 special with David Bowie.

In 1965 Bing hosted The Hollywood Palace with Fred Waring and his orchestra along with the cast of Hogan's Heroes (huh?). This closing segment starts out with a jazzy Schlitz commercial; then what was a (painful) regular feature on these programs where Crosby's kids perform - despite there being no evidence of talent on their part or any desire to be there at all. Crosby performs his signature tune here, White Christmas.

As frequent host of The Hollywood Palace Der Bingle was a natural to host the Christmas Eve broadcast in 1966 - in color!

Here's the 1967 Hollywood Palace starring Bing with more classic Christmas melodies, this time with the King Family, another musical collection of relatives that were popular back in the day. You'll also see the original commercials!

In 1968 Bing Crosby was host to the Lennon Sisters, another musical family that 1960s audiences embraced. Want to hear a wonderful version of Der Bingle's 'White Christmas'? It's here in this medley of Bing's most beloved Christmas tunes. Glen Campbell and Crosby's family also appeared on this show, a chance to once again show off his talentless kids. Those Crosby boys were lousy singers!