You may find this story difficult to believe but it's true. 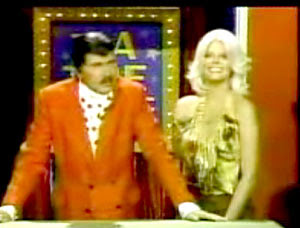 If you watched the Tonight Show with Johnny Carson during the seventies, you may remember sexy Carol Wayne. She was the big-busted, bubbly Matinee Lady of the 'Tea Time Movies with Art Fern' sketches that began in 1971 and stayed popular throughout the decade.

The Art Fern sketches have been removed from You Tube, all but this little bit:

Carol Wayne was also a frequent guest on game shows like Celebrity Sweepstakes and The Hollywood Squares, she also made quite a bit of money doing personal appearances. She had the ability to make the most innocent remark seem like a dirty joke with her little girl voice, wide "innocent" eyes and ultra-ample bosom.

It was an oft-told joke that Carol Wayne could never drown with those large flotation devices of hers - but ironically that's exactly how she did die. To this day, the exact circumstances leading up to her death in 1985 remain a mystery.

Carol Wayne had no way of knowing but her troubles began in 1980 when Johnny Carson threatened to quit his lucrative role as host of the popular 'Tonight' show. He wanted the show cut from ninety-minutes to sixty. The network was having a very bad year, and Carson was its biggest profit center at the time. NBC had no choice but to reluctantly agree, freeing up this time led to the creation of 'Late Night with David Letterman', which became another hot property for the network and Carson Productions - so everyone came out a winner. 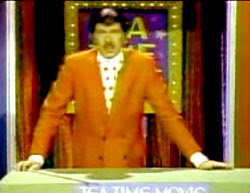 Everyone but Carol Wayne. The new sixty-minute format meant less time for skits starring familiar characters like Aunt Blabby, Floyd R. Turbo, and Art Fern. As a result, Carol Wayne's appearances on the 'Tonight' show became fewer and farther between.

At the very same time the game show craze that hit so big in the 1970s was over, that work dried up as well. In 1980, she divorced her husband, bestselling writer Burt Sugarman, four years later a thin, pale Carol Wayne declared bankruptcy due in large part to a cocaine and alcohol problem. It was said the entertainer was working as an 'escort' for wealthy businessmen in order to make a living.

According to published reports, Carol Wayne was on vacation in Santiago Bay, Mexico with Los Angeles car salesman Edward Durston on January 10, 1985 when (it has been reported) the couple had a argument about where they were going to stay that evening (they were scheduled to fly back to Los Angeles the next morning).

Durston checked into a hotel and Wayne reportedly left to walk down the beach (to cool off?). That was the last time anyone saw her alive. Three days later a local fisherman found her limp body floating in shallow bay waters, four feet deep. She was fully clothed, no cuts or abrasions; a fall from the nearby rocks was ruled out. The coroner stated that death had occurred 3 - 4 days earlier and the body tested negative for drugs and alcohol. Carol Wayne could not swim, for that reason she did not like to go too near the water. How then did she happen to be found dead in calm and shallow waters?

Suspicions were raised almost immediately. The TV star had to be identified by workers at the Las Hadas resort where the couple had been staying earlier in the week. They discovered that Edward Durston had checked out three days earlier - leaving Wayne's luggage at the airport with a message that she would pick up her bags in the morning. "Carol Wayne's death is unsolved, certainly," the U.S. Consular William LaCoque was quoted as saying in 1990. "But I don't think it was a drowning. A drowning, yes, of course, but there is much more to it than that." 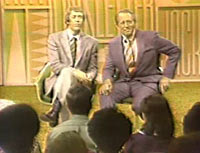 What more, we may never know but the story does get weirder - in 1969 popular daytime TV host Art Linkletter's daughter Diane jumped - or fell - from a sixth floor apartment building. Art Linkletter's highly successful television career virtually came to an end after he started crusading against drugs.

Diane Linkletter's companion the night she was killed was Edward Durston.
Posted by TVparty! at 9:09 AM