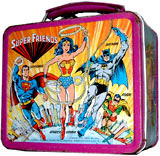 ABC was number 1 in daytime, including 'Funshine Saturday', and in primetime thanks to Happy Days. Here's a fall preview of their new daytime programs for 1974, one Saturday show was based on a prime-time hit of the past.

That was the trend of the early-70s (and beyond), cartoons based on My Favorite Martian, Addams Family, Emergency, Lassie, and Star Trek, were all broadcast on the big three networks the year before. This season an animated Partridge Family debuted on CBS, set in the Jetson's future.

NBC brought out the star power with a fall preview half-hour starring Jimmy Osmond. I don't know that the grotesque puppet minstrel show was very helpful... or appropriate. Really, 1974?

Land of the Lost was a big hit this year for NBC.

But this was the year CBS roared back into the lead with a live action show, Shazam! - that became the new craze and cartoons took a back seat for a few years..

Jump here for the complete schedule of all the shows
and watch your favorites at Saturday Mornings in 1974!
Posted by TVparty! at 10:56 AM No comments:

His film career as a performer was hit & miss by the fifties but silent film genius Buster Keaton appeared in dozens of commercials in the 1950s and 1960s. The stone faced comic pitched everything from airlines to candy, from Ford Vans to Alka-Seltzer. Keaton has 2 stars on the Hollywood Walk of Fame, one for films one for TV.

Buster Keaton did a series of spots for Northwest Orient Airlines

A number of Alka-Seltzer commercials, late-1950s advertising at its best.

This one for Ford was filmed shortly before Buster Keaton died in 1966.


More Las Vegas Legends!
Posted by TVparty! at 9:17 AM No comments:

Joe Pyne was TV's first angry conservative, precursor to Morton Downey, Jr., Bill O'Reilly and Rush Limbaugh. He hosted a very popular late night syndicated talk show and a radio program that was heard in 254 markets, he was the number-one morning guy in LA in 1966. He was outspoken and fearless in his zeal to get to what he believed was the truth - and he made for colorful, at times exciting, television.


The first Joe Pyne Show, debuted in 1954, broadcast locally on WDEL-TV; in 1957 Pyne moved to a station in Riverside, CA where he busted a high school drug ring on his radio program. Weeks later he was hosting a local LA television program on KTLA. His combative style caught on. 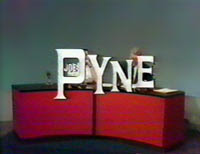 Metromedia offered him a local weekly LA slot and a nationally syndicated 90 minute program in 1965 filmed at the KTTV-11 (now FOX-11) studios, located in the former Metromedia Square. The show was a hit with young people and old cranks alike, it took a few years but the talk show became one of the hottest programs in syndication.

Just a few short years after finding major success on television and with ratings on the rise Joe Pyne died in 1970. He might be best known today because of an exchange with Frank Zappa. When he asked Zappa if his long hair made him a girl the musician quipped, "Does your wooden leg make you a chair?"

People watched Joe Pyne like they watched a hockey game - for the fights - here a brawl breaks out and Pyne loses his leg.

A lightning rod for controversy Joe Pyne kept a loaded gun in his desk drawer on the set, he most likely needed it considering the kooks and crackpots he gave a platform to. Every episode he allowed audience members to step up to a microphone and say whatever they liked... after which that person became the butt of the Pyne's insults. Audiences ate it up, there hadn't been anything so raw, so visceral on TV before - well, professional wrestling comes to mind.

He may have been a hardline conservative but Joe Pyne was largely on the right side of the Civil Rights movement. Here he mixes it up with the racist governor of Georgia Lester Maddox:

Pyne especially hated hippies and draft dodgers. Despised them, in part because of his war injury. He's at his condescending best interviewing Jerry Rubin, the very personification of the movement fresh off the protests in Berkeley. Political theater on television was born, sadly we see what this seed has fostered. Well, festered.

READ ALL ABOUT JOE PYNE