40 years ago CBS re-booted their long running but low rated morning show and it was a true debacle. See for yourself in these excerpts from the August 6, 1973 airing of the "CBS Morning News," it was an historic broadcast in some ways.

CBS was sick of losing mornings to Barbara Walters an the Today show so they brought in all of the CBS News heavy hitters to cover the morning stories and hired Sally Quinn from the Washington Post to put a softer, feminine face on the show. With little (or no) broadcast experience on her part, this move turned out to be an expensive and embarrassing flop for the network in '73.

For starters, ninety minutes before this live broadcast, Quinn collapsed from the flu. On screen she said weird things like, "that was how I felt when my mother and father made me clean up my room" after a report on the brutal conditions suffered by child migrant farm workers. 6 months later she was gone.

Note the seriousness of the program compared to the fluff that's airing today, there's a depth to the stories you would expect only from 60 Minutes now. 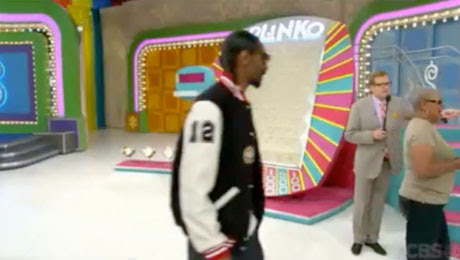 The audience's favorite segment on the long running game show 'The Price is Right' is Plinko where a contestant can win up to $50,000. Did you ever see the episode where Snoop Dogg (Lion) played Plinko? It happened in 2012...

The Many Loves of Dobie Gillis on DVD

One of the greatest sitcoms of all time has arrived on DVD, The Many Loves of Dobie Gillis (1959-1963), starring Dwayne Hickman and Bob Denver. This is one of the rare comedies of the early-1960s that still holds up today, a solid production in a first class DVD package.

This was a radical departure for sitcoms, teens on TV had always been portrayed with a distinct 1940's worldview, a ubiquitous anachronism. While the culture was undergoing an evolution, a revolution, TV teens were represented by guys dressed in sport coats, sweater-vests and ties, and gals in flouncy dresses sporting bobby socks and patent leather shoes.

It could be argued that Dobie broke the mold in a radical way, more animals than teens had a meaningful role on a television series in 1960. There hadn't been many shows (I can't think of any off-hand) that had been about someone other than an adult unless it was a little kid, think Leave it to Beaver - or Dennis the Menace which debuted the same year as Dobie.

More than any other series of the period Dobie reflected the youth culture as it existed - the casual dress, beatnik scene, the emerging me-first generation in full flower - all punctuated with a jazzy score.

Read the entire review of Dobie Gillis on DVD and
why Maynard was almost written out after episode 4!
Posted by TVparty! at 5:27 AM No comments: 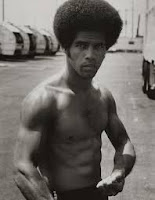 Conservatives were frothing with anger over the Ferguson report. Talk about government overeach, jackbooted thugs enforcing how you cut your grass, harassing law abiding citizens, exactly what they've been railing against since Obama took office. (There's a whole section on the overuse of force against students by police in schools.)

Time to pick up your guns and take back the community, right? If not for this, then what? A sterling example of fascism right here, right now. Perfect opportunity for Tea Party True Patriots to stand with the people against... oh, who am I kidding. The city of Ferguson is a right wing wet dream.

Maybe we can learn from the Historical Tapes.

Football star, martial artist, and Blacksploitation film great Jim 'The Dragon' Kelly died on June 29, 2013. No Hollywood phony, before his acting career began, Kelly won the World Middleweight Karate title. Here's a scene from "Three the Hard Way" that shows just how awesome he was on screen, when an overwhelmingly white police force tries to set our man up on a drug charge. That old routine!

I love how this scene plays, it looks like there's a hurricane blowing around them. No doubt accidental but it does serve as a metaphor. Notice also... cops today don't run in, they gun in.

More on the death of Jim Kelly.    TVparty! is Classic TV! Recently I was contacted about a comment I made concerning  'Winky Dink & You' being "world's first interactive video game" that has now been attributed to Bill Gates (Billy Ingram - Bill Gates - close enough, right?).

I was kidding when I wrote in 1994 that the distinction belongs to  a TV show from the mid-1950s that asked kids to draw a bridge (or a car, whatever) on a Magic Screen to help Winky escape the villain. It gave the illusion of being interactive, children bought into it 100% - ask any boomer who remembers the series and you'll get a tremendous look of excitement.

Of course, there was nothing the user could do that would really change the outcome of the game. Here's one of the shows... it was revived briefly in 1969. You can read more here about Winky Dink & You.

No one to my knowledge has ever written about the actual first modern interactive video game that went beyond Pacman-like animation, I just happened to have worked on the project 30 years ago this year. Produced for the Walt Disney Telecommunications and Non-Theatrical Company by Bosustow Entertainment in September 1983 it was called 'The Disney Disc of Fantasy and Magic'. Stephen Bosustow was one of the founders of UPA Studios, they produced those Emmy winning Mister Magoo cartoons along with many other faves like Gerald McBoing Boing.

In 1963 he went out on his own and formed an animation house with his son Nick. In 1970 they produced a cartoon version of 'The Legend of Sleepy Hollow' with John Carradine starring; 1978 they animated the children's story 'Tom Thumb' for television with voices provided by June Foray and Hans Conried. Bosustow also employed the vocal talents of Louis Nye, Don Messick, Stan Freberg, Claire Bloom, James Earl Jones, Michael York, and many other entertainment giants. In the 1980s they were providing content for 'CBS Library', winning the Emmy in 1983 for 'Wrong Way Kid' starring Dick Van Dyke.

Though Bosustow was an animation house, 'The Disney Disc of Fantasy and Magic' was a live action shoot. It was centered around a wizard who ran a haunted hotel and his assistant, an ape (obviously a guy in a costume). At different junctures in the 30 minute game the kids would be given three hotel room doors to choose from, that would determine the next chain of events.

Because of the limited space on a Laser Disc there weren't really that many pre-determined outcomes so the game never really caught on. At least that's my theory, to be honest I don't know for sure if it was ever released... who had a laser disc machine?

I was the prop master for the project, creating the door exteriors and other things. When I went for my first meeting the Bosustow studio had rows of animation desks in a large open studio that all sat empty, I was asked to man one of those desks to make it look like the studio was still operating when the director got there. In fact, there were no active animation projects in house.

That was when I met with the director, the famed Norman Abbott, who directed everything from 'The Munsters' and 'Leave it to Beaver' to 'Alice'. What a nice guy he was, such a pleasure to work with, whatever weird stuff would happen on the set he could adapt at a moment's notice. (Everyone was convinced the project was cursed and I heard later that Disney took so long to pay Bosustow's invoices that they went out of business.)

I hired one of Bosustow's freelancers to create illustrated cards featuring the requisite Disney characters (like Snow White) that had to be drawn 'on model'... in other words they had to be correct in terms of the character's designs. Whoever the artist was she was pitch-perfect. The production was filmed on a soundstage at CBS Television City in Hollywood.

The effects guy / art director on the film was Peter Knowlton. I had just worked with him on the special effects for 'Cujo', that's another wild story I'll have to tell (I was almost Cujo in the film). Above is a still from 'The Disney Disc of Fantasy and Magic', (I can't find the original, this is a 1980s photocopy so it's a bit murky). The folks at Disney were so nice they sent everyone who worked on the project a snapshot and a personalized letter of recommendation. Who does that?!? What I recall most is what a class act Stephen and Nick Bosustow were, in a business full of sharks and low lifes they stood out to me. 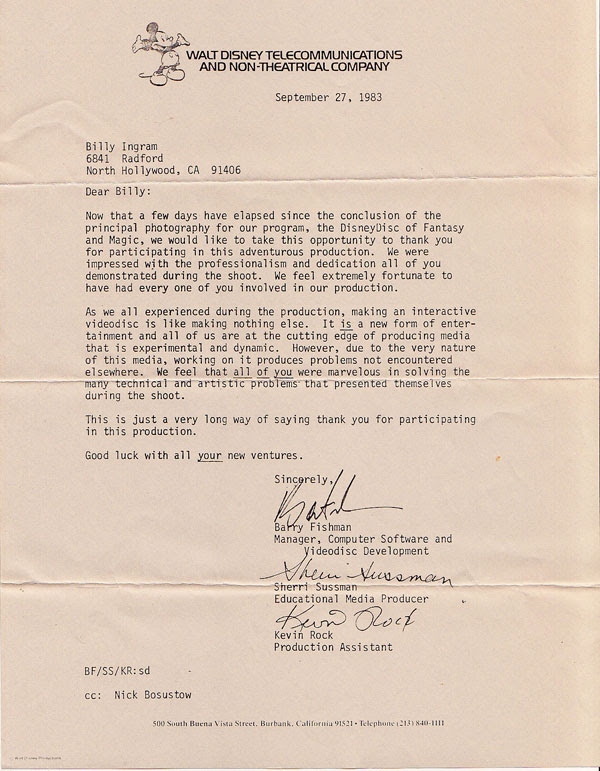 "I met a girl a few weeks ago, works in a restaurant makin' hamburgers. She told me she could make a Big Boy in 3 minutes and a boy big in 2 minutes."

After a decade of bombing in comedy clubs Rodney Dangerfield made a splash on TV with an appearance on The Ed Sullivan Show in the 1960s. Before long he became known for his "I Don't Get No Respect" routine, a genius hook for a comedy bit.

His career really took off in the 1980s with a string of hit movies. I worked on the trailer and poster for Rover Dangerfield, an animated feature produced after his successful film run was over. That expensive 1991 production was God-awful, causing the comic to loose a good chuck of his own moolah. I think everyone involved knew it was a doomed project, everyone but Rodney himself who was a very pleasant guy, he loved the poster art we did.

Dangerfield was on Johnny Carson's Tonight show more than 30 times, one of Carson's favorite guests - he nailed it every time and was in tune with Johnny's sense of humor as you'll see in the clip below.

Most of the Tonight appearances have been deleted but Here's Rodney from 1973. I believe this is from an episode of Dean's Place, a proposed weekly series for Dean Martin after his variety show ended.