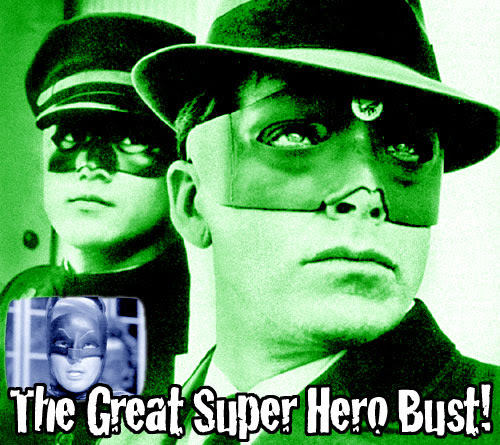 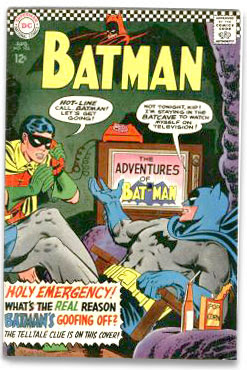 As 1964 rolled around, National Periodical Publications (also known as DC Comics) was poised to make a momentous decision. The venerable comic book publisher had been in business for decades, pumping out the comics kids loved best. Superman. Wonder Woman. The Flash. Justice League of America. Batman.

Batman, see, that was the problem. That comic book line ceased making a profit some years earlier, Batman and Detective Comics (where the character debuted in 1939) were going to get canned after a quarter century on the stands.

As a last-ditch effort, the books were assigned to the editor of DC’s science fiction line, Julius Schwartz. His mission - move Batman into profitability within six months or else. The team he assembled did the trick, turning the Caped Crusader into more of a high-tech sleuth and less of a costumed clown. Colorful villains like Catwoman and The Joker were resurrected and given new life in stories by John Broome and Gardner Fox, illustrated by Carmine Infantino and various artists under the “Bob Kane” byline.

That same year, 1964, Shindig! debuted on ABC-TV. A prime-time rock music show that featured live (not lip-synced) performances by the biggest acts, Shindig! was a sensation at attracting the youthful crowd the network was courting. The show did so well, it was expanded to an hour midseason and in the fall of 1965, split into two half-hour shows a week. This two episodes a week format was not unheard of; ABC had been doing it for a few years as a way of milking their hottest shows. Peyton Place was broadcast two nights a week in 1964 and three nights in 1965.

Unfortunately, the audience unexpectedly deserted Shindig! after that first season leaving two gaping holes in ABC’s already desolate schedule. In an act of sheer desperation, they rushed one of their most promising shows forward for a midseason debut. This was a risky move because, while there had been other shows that premiered in the winter, they were never terribly successful. 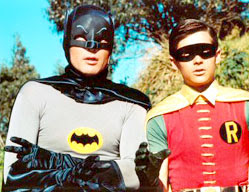 Batman starred Adam West as the Caped Crusader and Burt Ward as his youthful sidekick, Robin. West was last seen on The Detectives (1961–62), Burt Ward an unknown. Proving to youngsters at an early age that life isn't fair, Batman was scheduled opposite Lost in Space on CBS.

Together with screenwriter Lorenzo Semple, Jr., executive producer William Dozier crafted a show that could be enjoyed by adults as well as kids. Batman debuted on January 12, 1966. Within the first few weeks, the telecast was attracting fifty-five percent of the viewing audience, with a surprising two-thirds over the age of eighteen. 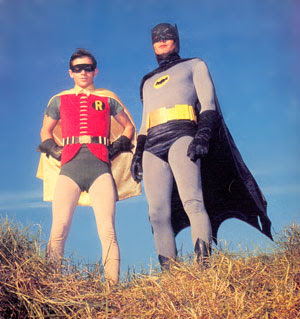 They called it "Camp," ironic comic perfection. The key to Batman was in the lead actors playing outlandishly fantastic situations with a straight face, and the stunt-casting of hot TV personalities like Julie Newmar (as the Catwoman) along with aging movie icons like Cesar Romero (as the Joker) and Frank Gorshin (as the Riddler). Before long, every star in Hollywood lined up for an opportunity to be the costumed kook-of-the-week on the top show in the nation. "These people (stars) would call up, or send their agents around, saying, can't so and so be on?"

William Dozier bragged to a reporter, "Gloria Swanson, I remember, called me from New York, but we couldn’t find the right part for her. Everybody came out of the woodwork; we never had to go after those people. A lot of them I had known personally, and they would call and say that they would love to do one of those because 'my kids want me to do it.'

"Up to twelve years old, they take Batman seriously. From thirteen on, we've got them chuckling in their beer." Indeed, Dozier (who was also the show's announcer) instinctively knew this pop-art froth had a short shelf life, just how short? Network rivals were betting Batman was another hula hoop craze. "They gave it only ninety days. I gave it two years."

At the end of just six months, Bat-mania was in full flower. $75,000,000 worth of Batman books, capes, toys, coloring books, bubble gum cards, and weaponry had been sold, with Batman's face plastered on every conceivable product whether it had any relevant practicality or not. Never before had the world been bombarded by such a ridiculous assault of loosely branded products. Batman candy. Batman bicycles. Batman lunch boxes. Batman bath soap. Batman race cars. Batman lamps. Batman every-damn-thing-you-can-think-of! And those Batman comic books DC almost stopped publishing two years earlier? They could barely keep up with demand, any comic book with Batman on the cover could be counted on to sell up to a million copies a month. Editor Schwartz had done his job well since many of the plots for the TV program were taken directly from his four-color stories.

Batman changed the course of television in a profound way by proving that a program could debut midseason and still be a hit. From 1966 forward, all three networks began seriously programming a second season.

"Batman will fade, of course," Dozier correctly predicted in the Saturday Evening Post, at the height of the show's popularity. "We won't keep all the adults we have now. We have to think ahead."

Dozier was right to be concerned about audience erosion, he reasoned that adults would soon defect once the novelty wore off. By the fall of '66, Batman was the number-one show in the nation but adult ratings had dropped to half what they once were. Not surprisingly, ABC was more than willing to give the producer another slot on their fall schedule, Batman was the biggest hit in the network's history.

To recapture lost adult viewers, Dozier decided to try the super-hero genre without playing it for laughs. To achieve this, he revived one of the most successful super-heroes from the radio era - The Green Hornet.