The original 'Jackie Gleason Show' aired on CBS from 1952-1955 as a traditional hour-long variety show. In 1955, the series was pared to thirty-minutes and featured exclusively one of the regular sketches from the show - 'The Honeymooners. The show returned to an hour format in the fall of 1956 for one season.

"The Great One" (as he was known) returned to television in October of 1958 in a live, thirty-minute variety show - but Gleason stopped production after a three-month run stating: "Anytime quality has a deadline, it's got to deteriorate. You can strive for quality week in and week out, but you won't often get it because it can't be manufactured within a specific time."

Switching gears, Gleason's next TV project was a game show. Games were big in the ratings, Groucho was having tremendous success with You Bet Your Life on NBC. You're in the Picture was added to the CBS schedule on January 20, 1961 to replace the poorly performing sitcom 'Mr. Garland', Friday nights at 9:30. How's this for a premise - celebrity contestants stick their heads into a painted scene, and they have to guess what the scene is, or what historical figure they represent by asking the emcee questions.

The celebrity contestants for that first (and as it turned out ONLY broadcast) episode included Jan Sterling, Keenan Wynn, Aurthur Treacher, and Pat Carroll.


Jackie Gleason : "You're in the Picture" by werquin 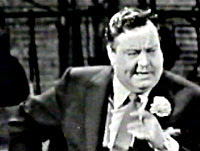 Cope Robinson writes: "Well, I saw 'You're In The Picture' too. From the control room at some CBS theatre for I had bought the program. I, or rather my company, was the sponsor.

"Jackie and the people at William Morris, his agency, had put the production together. Together with CBS, they pitched the program to me and a few others at Liggett & Myers. I remember thinking that the show could be risky for it was quite removed from anything that Gleason had done and the premise of celebrities sticking their heads through a painted plywood board and quessing what historical character they were supposed to be was pretty shaky.

"But I think I thought that since Jackie Gleason was at the peak of his career, he could pull off a silly game show with the same success Groucho Marx was enjoying on NBC.

"It was a huge bomb! Everybody knew it. Gleason, William Morris, CBS, and, for sure, Liggett & Myers. The real question after the first show was what do we do now.

"I don't remember who came up with the idea for the second show, probably Gleason himself. Nor do I recall that CBS wanted to continue with the game show. If they did, they didn't tell me and I can add if they had they would have done so without this sponsor.

"I should have known that things would go wrong when at the first script rehearsal, the first meeting for the show, Gleason asked before the start, "Who is the GREAT ONE?" A chorus rang out, "You are!" That began an association with the greatest egotist I have ever known."
Posted by TVparty! at 3:23 PM No comments: 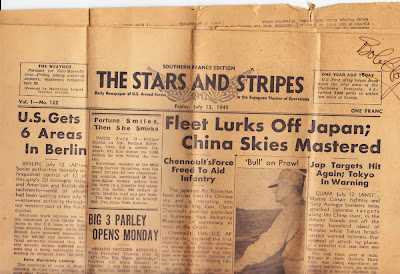 July 13, 1945 - the war is ours to win, this date is significant in that it was the day of the Oak Ridge Petition in which atomic scientists approved the use of atomic bombs, "particularly against cities, be sanctioned by you as the Chief Executive." Basically giving the green light to drop the bombs. Of course, you wouldn't have read about THAT anywhere! 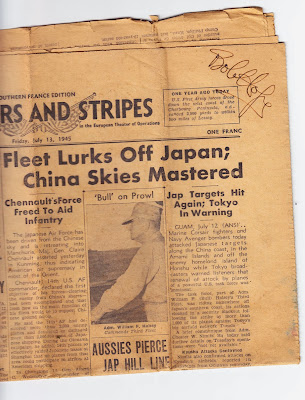 On the cover - Admiral Halsey - (apparently he did get to sea.) 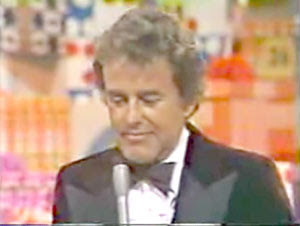 Sad news that one of television's greatest daytime stars passed away on Wednesday, March 5 2014 - Geoff Ewards was 83.

One of my guilty pleasures from years past was The New Treasure Hunt from the mid-1970s starring Geoff Edwards, a master at wringing comical moments and over-the-top reactions out of the contestants.

The premise could not have been simpler or more random - each audience member opened a package to determine which one of them will be invited on to the stage for a chance to win cars, boats or even $25,000. That was huge money for a game show in the 1970s. 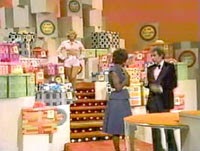 Based on a game show from the fifties (Treasure Hunt), this Chuck Barris production is my favorite game show of all time. This was Geoff Edwards' shining moment - emotionally torturing his overly-excited contestants for laughs.

No skill or knowledge was needed on The New Treasure Hunt, it was a lot like Deal or No Deal - two contestants on each episode got to choose from thirty wrapped packages displayed center stage.

They had a shot at the usual game show prizes (washer-dryers and Turtle Wax) or a chance at the grand prize - a check for $25,000 (that's about $125,000 in today's dough). It later increased to $50,000. Quite a few people found the check which heightened the excitement. There were also booby prizes called "clunks" interspersed with the prizes. The way Edwards would tease the contestants mercilessly before delivering the verdict was nothing short of brilliant. And the silly skits somehow worked when Geoff Edwards performed them.

To prolong the suspense, the host would peek into the boxes before the contestant got a look and go through a number of fake-outs before he sprung the actual prize on them. In so many cases, the contestant would be a large black woman who went absolutely berserk at the prospect of winning a big prize, jumping up and down, screaming at the top of her lungs and pummeling the poor host.

Part game show, part wrestling match - Geoff Edwards often ended the show on the floor or off to the side of the stage. This led to some degree of criticism that the show was overly exploitive. 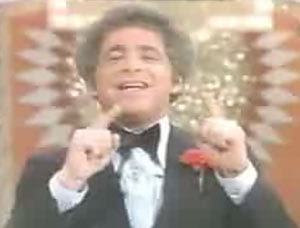 In the mid-seventies, the game show genre was suddenly enjoying a popular revival, thanks to the success of 'The Price Is Right', Match Game' and others from Goodman/Todman Productions.

Networks unveiled new game concepts at a frantic pace for daytime and syndication. Producer Chuck Barris and variety show writer/producer Chris Bearde ('The Sonny And Cher Comedy Hour') were producing The Bobby Vinton Show for syndication when they sold ABC on the idea of a daily talent / game show. The acts featured would be both the best and worst they could find, with an emphasis on the bad. Think daily American Idol auditions.

Chuck Barris was responsible for some of the most popular programs of the Sixties, primetime and daytime hits like 'The Dating Game' and 'The Newlywed Game'. These pseudo-game shows fed off of an individual's willingness to do anything to be on television, 'The Gong Show' would take that premise a step further. ABC bought the show for nighttime syndication, to debut in the fall of 1976. 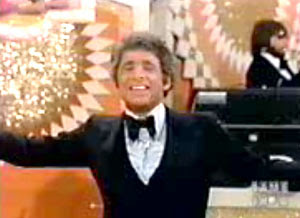 Filmed at KGO-TV in San Francisco, the audience reaction was enormous.


'The Gong Show' had a simple premise: If an act didn't get the gong from one of the three celebrity panelists (usually featuring the lovely Jaye P. Morgan), they would be scored on a 1-10 scale. The contestant with the highest score wins the 'grand' prize.

The prize amount low ($516.32) to keep it from being too important to anyone and professionals weren't allowed to compete for the grand prize. Instead they were paid the actor's union scale for their performance - $516.32. ($712.05 was the take on the syndicated nighttime version, later an even thousand).

This is the most infamous episode of The Gong Show with the Popsicle Twins - when you see what these provocatively dressed girls do with their frozen treats you'll know why NBC hit the roof!

Host Gary Owens was an old friend from 'Laugh-in'," Chris Bearde said at the time, "So were most of the panelists - Arte Johnson, Joanne Worley, Dick Dawson and Adrienne Barbeau. People were literally rolling in the aisles, really out of control."

The reaction to the first filmed episode was so strong Barris was able to sell NBC on a daytime version of 'The Gong Show'. Bearde would produce the nighttime version and Barris the daytime show. NBC was having a lot of trouble finding an audience for their lame game show offerings in 1976, they wanted a different host for their daytime version. Chuck Barris tried out different people before settling on John Barbour (later of 'Real People'). Frustrated with the results, Barris fired Barbour and took over hosting duties himself because taping day for the first week was too close to hire anyone else.

The NBC version actually beat the syndicated version on the air by several months, an instant hit. Chuck Barris eventually took over the nighttime hosting duties on 'The Gong Show' as well, firing Gary Owens and buying out Chris Bearde. Gary Owens was upset by his ousting: "You were working at a disadvantage, doing a show the producer wanted to do himself."

The show was a true phenomenon with T-shirts, a best-selling book and even a major motion picture release. It made 70's icons out of 'The Unknown Comic' and 'Gene, Gene the Dancing Machine'.

Ten shows were taped over the weekend, with snacks and drinks (including alcohol) between tapings. Some of the celebrities would get pretty drunk as the day wore on. During one infamous filming, Jaye P. Morman ripped open her top and exposed her boobs - but then, she had a reputation for being a wild woman.

Chuck Barris was philosophical about the success of the Gong Show; "All I want to do is make the bread, put it in the bank and live happily ever after." Here's a plea . . . Chuckie baby, come back, all is forgiven!!!
Posted by TVparty! at 8:41 AM No comments: