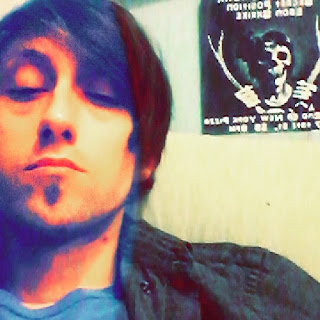 He's known around the Carolinas, and beyond, as a renowned punk rocker with a wall to wall performance style, the lead singer of Taylor Bays & The Laser Rays. If you've seen him live you'll agree, he's one of the most dynamic singer/songwriters in the country.

Here's an example from one of his CDs:

Taylor Bays is also well-known, in Greensboro, NC anyway, as the Psychic Punk Rocker who's found missing items, helped police nab a criminal, and even correctly predict where the body of a missing child would be found.

This "gift", as Bays calls it, can manifest itself in myriad ways. "Sometimes I get vibrations, like someone whispering not in my ear but in my brain. One time on the UNCG campus I got a message that a felon was lurking nearby. When I indicated this to an officers she checked it out just to humor me. Turns out it was someone she's been looking for."

"As soon as I heard about the disappearance of Mariah Woods," Bays told me as I was working on this story, before the youngster was even known to be dead or how she came to be that way. "I concentrated on her image and could 'see' her lifeless body beside a creek - but she was not murdered there. The perpetrator is romantically involved with the mother." Tragically, the body was discovered alongside a creek and had been moved there by the killer, the mother's boyfriend, just as he described.

Bays isn't grandstanding, far from it, "It's not something I talk about, hardly at all, so it's weird people actually know me as a Psychic Punk Rocker." To contact those who have passed on, Bays doesn't use a crystal ball but a crystal bowl as he explains, "This bowl is over 100 years old. It has the perfect harmonics needed to contact the spirit world."

Naturally skeptical, I attended one of his seances recently and, indeed, Bays appears to be the genuine item. At one point in the seance, Bays indicated that my grandmother was coming through.

Gazing intently into the crystal he told me, "She says 'peanuts' would mean something to you." Indeed it did. When I was 10 years old, my Mema gave me a hardcover collection of Peanuts comic strips that she signed the front page of. I bring it out every Christmas to remember her.

In another psychic reading during that session, a young lady was told by her deceased father where her mom's wedding ring could be located. When I followed up with her, she told me that treasured ring, one she'd thought lost forever, turned up exactly where Bays said it would be.

Is the so-called Psychic Punk Rocker always correct, "No, sometimes I can misinterpret messages and also, keep in mind, the future is subject to change due to unforeseen circumstances."

Mutual friend Jeff Losh is equally impressed with Bay's amazing cognitive powers, "My baby was terribly ill, the doctor's didn't know what was wrong. Taylor was able to diagnose the problem as a blockage that could be easily cleared up and he was right!" That child is healthy and happy.

"Even when we were little kids, Taylor was always finding lost things," Bays' brother Brian remembers. "Nothing stayed lost in our household. We'd just ask, 'Where is it Taylor' and he'd run right to that thing. Once he pointed to a house on our block and told me the man that owned it was dead. They found his body 2 weeks later when the smell got so bad. He'd been dead 2 weeks."

As for the future, "Donald Trump will leave office next year," Bays predicts. "This will trigger a great deal of civil unrest, unfortunately."

What Bays won't do is accept money for his gift, "I don't know, maybe the day will come, but right now I only do this for friends, family, and friends of friends."
Posted by TVparty! at 8:17 AM No comments: