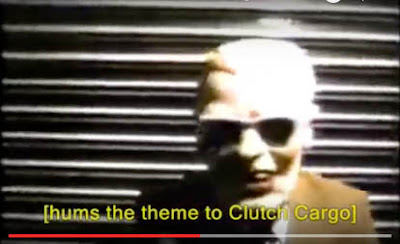 It's almost too frightening to consider. What would happen if our trusted media outlets were suddenly hijacked by a cabal of dissident ideologues, subjecting an unsuspecting public to relentless disinformation campaigns littered with vile, slanted viewpoints and twisted facts designed to brainwash the masses?
Come to think of it, how would we know the difference?!?

Recent articles about the possibility of foreign terrorists taking out the internet with worms and viruses reminded me of a time on November 22nd 1987 when a couple of guys, one wearing a Max Headroom Mask, took over the television airwaves in Chicago, disabling two different stations in order to broadcast their own twisted idea of entertainment.

A little history: Max Headroom (played by Matt Frewer) was an investigative journalist in a fictional TV series set in an apocalyptic future. With a crude, choppy signal Max would break into the official TV news reports with his own reportage that was embarrassing to the powers that be. (He also was seen in dozens of Coke commercials in the 1980s.)

The first 'Denial of TV Service Attack' on that November night in 1987 took place during WGN's live nightly news program. Stunned viewers saw was someone approximating the Max Headroom persona standing in front of a moving corrogated metal background with only an odd buzzing sound heard. In less than 30 seconds WGN engineers moved their signal to another transmitter, regaining control.

(WGN was already on alert for such anomolies - four years earlier cold weather caused a signal jump resulting in the Bozo show being replaced by Fast Times at Ridgemont High, nudity and profanity intact.)

It got a lot weirder when 'Max' returned on the local PBS station WTTW at around 11:15pm, during an episode of Dr. Who.


This time the TV Pirates were more successful, they used their minute and a half of airtime to berate liberals and "newspaper nerds." The guy in the Max mask shot the finger to the camera and hummed the Clutch Cargo theme song. He waved around a Pepsi can while repeating Coke's slogan "Catch the Wave" - then retrieved the Pepsi can saying, "Your love is fading."
Then the unthinkable happened. 'Max Headroom' dropped trou in order to allow his accomplish (his brother?) who was wearing a dress to take a flyswatter to his bare behind. During Dr. Who no less, was nothing sacred?!?
WTTW engineers tried frantically to kill the signal but were unable to before the electronic ------ ended abruptly.

This was surely the tackiest terror attack of all time but the assailants were never discovered. No doubt if they had come forward they would probably be big time TV producers now, after all their minute and a half show was still better than last week's Two and a Half Men.

We all know if the ratings had been good for the 'Show Me Your Ass And I'll Paddle It' program it would still be on today. At the very least, WTTW should air this during pledge breaks...