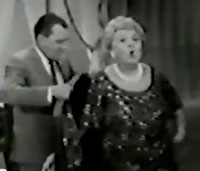 She somewhat reinvented herself on TV as a comedian for old folks by making her age and longevity the hook of her comedy. Here she is on The Ed Sullivan Show in 1960. She couldn't very well go on teevee and tell dirty jokes now could she?

In her last network appearance on Ed Sullivan you can tell she's exhausted. Her accompanist and musical director Ted Shapiro started with her in 1921, he's seen in this clip. Sophie Tucker collapsed after finishing the first night of her comeback engagement at The Latin Quarter in December 1965 and never fully recovered. She died in February of 1966 at age 80.


Bette Midler 1979 made Sophie relevant again in the 1970s when she incorporated some of the old gal's jokes in her act, and later used her as a jumping off point for more risque humor, there are examples in this interview from the early-eighties. The jokes start at 3:18.